The GlobalLimits Sri Lanka race is complete, and I have lived to tell about it!

Or, perhaps more importantly, all of the runners have also lived to tell about it.  The race went incredibly well, and in fact, all runners finished.  There were far fewer medical issues than in Cambodia – much to my relief.  And I learned the joy of being part of a rock solid medical team.  The other physician on the trip was Nia Owens.  She is not only a phenomenal expedition doctor, but also an absolute blast to be with.  She is originally from the UK but is currently practicing in Australia, and has worked numerous large scale endurance race events.  I know that it is absolutely ridiculous, but I think that we got as good at taking selfies as we did at taking care of runners….  Here’s just one example:

So the race was a total of 210km broken down over 6 consecutive stages.  The stages ranged in length from 15km to almost 60km.  The higher km stages made for some long days for our runners, but everyone seemed to really enjoy the scenery and remained in good spirits throughout the week.  Once again, I was both humbled and impressed by the mental and physical toughness of the runners.  Here’s a brief breakdown of the different stages:

The race began at Yapahuwa Temple, a site that served as the capital of Sri Lanka in the latter part of the 13th century.  There is a huge granite rock rising almost 100 meters above the surrounding jungle, and it was midway up this steep incline that the race began.  Prior to charging off, there was a blessing performed by two Buddhist monks.

Our transportation on the race course is mainly via tuk tuk. 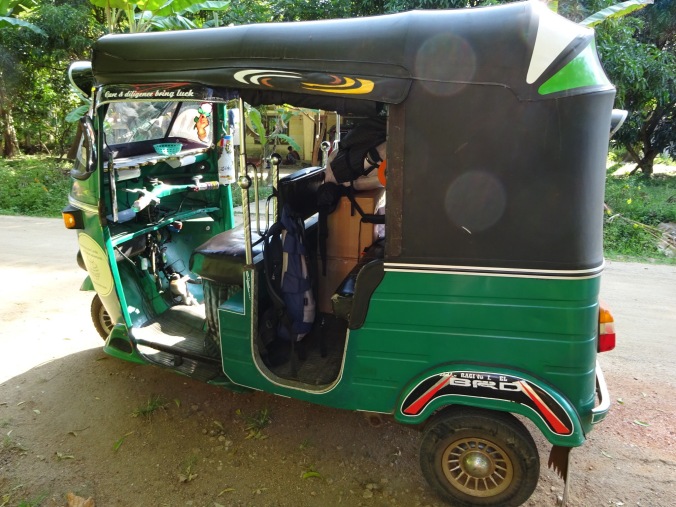 I’m not sure that these little vehicles are much faster than some of the runners.  The runners looked great as they poured through my checkpoint, and they were all handling the heat quite well.  I’m starting a study to look at nausea in endurance runners, and so began the bombardment of everyone with questions about if they felt like they had to throw up.  I’m sure they felt like it after a whole week of my questioning….

The finish line and camp was at another sacred Buddhist site – the Temple of Sasseruwa.  There were busloads of school children arriving to the ground, and then lining up side by side in their white uniforms.  They seemed delighted to be able to yell “hi” and wave at us.

There were no medical issues in camp this evening – not even any feet to tape!?!  And very little nausea.  Which was good for the runners, bad for my study, and in stark contrast to the puke-fest of the Cambodian race.

The day started with the usual routine of eating breakfast, drinking tea, packing up everything, and then quickly checking in with the runners.  I went via truck to a checkpoint where I spent the day waiting for and then divvying out water for the runners.  After the checkpoint was shut down, the debacle began…  My driver managed to get us lost for 2.5 hours on the way to camp.  He would drive 100 feet, then stop and ask for directions, then drive another 100 feet, then stop and ask for directions, repeat ad nauseam.  I finally got so frustrated that I got out of the car and walked to camp via the race markings.

Only a few minor ailments with the runners this day.  There was a very sweet older gentleman who took a spill while running, and needed his knees tidied up.  There was also heat rash, and the inevitable tide of blisters began.  Nia and I held a foot clinic in order to teach the runners about how to take care of their feet.  A lot of people ended up coming over, and everyone actually seemed really interested in learning.

We were staying in a little village tonight.  The local people were kind enough to clear out from their homes so that our group could have a place to sleep.  After seeing a scorpion on the wall in our house, I opted to try out my hammock for the first time.  It’s a Hennessy Hammock Expedition Asym Classic, and it’s awesome!  I slept like a baby in it.  And I was grateful to have the fully enclosed mosquito netting after I saw a large-ish (to me anyway) spider hanging out underneath me.

The team went to our respective checkpoints this morning in a convoy to try and avoid getting lost again.  Unfortunately, it didn’t work out that well as we blew past checkpoint 1 and had to backtrack quite a ways.  There weren’t many issues at the checkpoint today – medical ones anyway.  Three runners got lost on the course and had to be found via tuk tuk.  They were fine, just a little irate that they went a little further than they had to.  I reached camp by noon, and spent several hours at the finish line, waiting for the runners to come through.  I enjoyed my daily lukewarm coke.  I don’t know what it is, but you can go anywhere in the world and always find a coke.  And for whatever reason, they are always insanely delicious when you are in a random foreign country.

The foot issues are starting to ramp up.  Several people had subungual hematomas (also known as runner’s toe). This is basically when the downward pressure exerted on the nail bed while running leads to bleeding and pooling of blood underneath the nail plate.  It tends to be pretty uncomfortable, and people get relief through trephination.  Which is a slightly barbaric procedure of whittling a sharp, heated beveled needle through the nail. But oddly enough, runners do thank you after releasing the pressure.

The race plans for the next stage have slightly changed due to wild elephants being close to camp.  I would have loved to see one, but given how dangerous they can be, I doubt we will get anywhere close.

The medical team working hard at the finish:

Stay tuned for the 2nd half of the race…