As promised, here’s the 2nd half of GlobalLimits – The Wild Elephant Trail….

This was a loooooong and grumpy-inducing day.  We had a late start of this (long) stage because of the many wild elephants in the area. 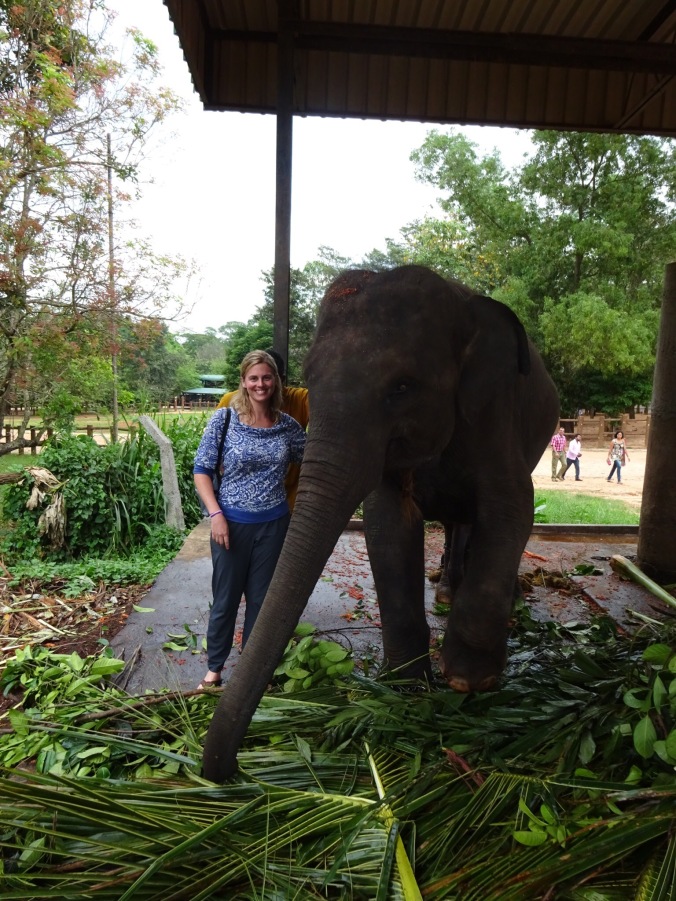 (This is not a wild elephant…. we hit up the elephant orphanage on the way to the airport)

I was at checkpoint 2 which was pretty much in the middle of nowhere.  Everyone ended up coming through a little quicker than expected.  There were no major medical issues with anyone – it was satisfying to see everyone doing so well.  After the last runner came through, it was time to get in the truck for 2 hours with the driver either slamming on the gas or mashing on the brakes all the way to the finish.

I spent about 7 hours at the finish line, waiting for all of the runners to make it through. 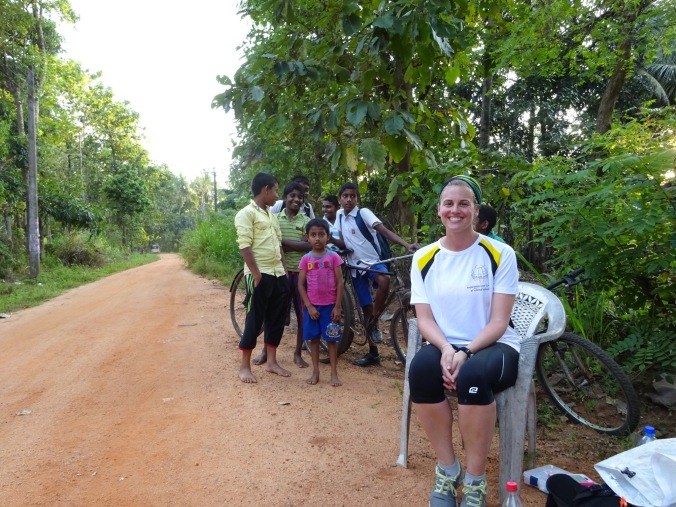 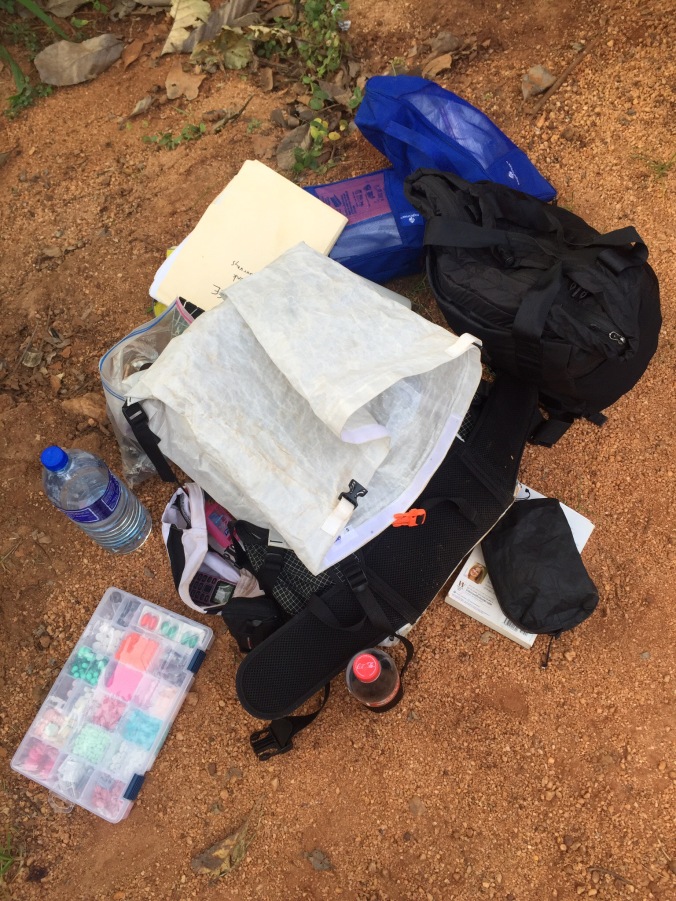 A few people ended up lying down right across the finish line.  And there was a girl who ran the last mile in her bare feet because she was so fed up with her shoes hurting her.  There were open heel wounds, and a little exhaustion with some nausea thrown in.  But overall, nothing too major.  Despite the strenuous day, the mood was buoyant at camp.  It’s easy to see that a huge weight is lifted off of the racers’ shoulders after completing the long stage.  It’s crazy what the human body can do, and maybe even crazier how little it needs to do it.  There is a gentleman here who only started running 6 months ago, and had never run further than a 20k.  There is a runner who never really stops at the checkpoints to get water.  There is another infamous racer who re-hydrates with beer, and lights a cigarette the moment that he crosses the finish line.  Depiste the ubiquitous nature of fancy energy gels and drinks, some people get by on Coca-Cola alone.  Pretty interesting.

After everyone was safely at camp and all medical issues dealt with, it was finally time to climb into my hammock.  Which setting up was a hoot.  A few local guys saw me trying to set it up and came over to “help.”  They kept trying to tie the cords to all of the wrong places, and it was comical trying to explain to them what I was actually trying to accomplish since they didn’t speak a word of English.  But it was sweet of them to help, and it definitely made setting up my humgle abode for the night a little more entertaining.

Despite having a late race start today (9am because most of the original trail was totally flooded), everyone still got up pretty early.  There were a lot of feet issues to deal with this morning.  People got in so late the day before that their feet didn’t get a chance to dry out before bed.  So my morning was spent with stinky runners’ feet on my lap with a cup of tea in my hand.  Most folks say thank you about a million times though for any podiatric assistance.  It is really nice to have people who are actually appreciative.

The mud ended up making it a total cluster to get to the checkpoints.  I eventually found my spot at a 5-way intersection in a tiny village.  I set up in front of a Buddha statue.  The local villagers were very interested to see a little white girl hanging around their town.  Lots of people came over just to stare at me.  There was a guy who kept shouting at me.  As the other villagers would pass, they would point to their heads as if to tell me “don’t worry, this guy is just crazy.”  Apparently international sign language exists for this kind of circumstance.

We had a runner with a questionable stress fracture so I ended up following the last runner to camp on foot.  It was a lovely 10k walk in the rain.  After winding through thin jungle paths, through tiny villages, and along major roads where every tuk tuk driver was convinced that I needed a ride, I finally got into camp (or paradise – see below) with the last racer.  Everyone was waiting to cheer him home.  The sense of community is both refreshing and inspiring. 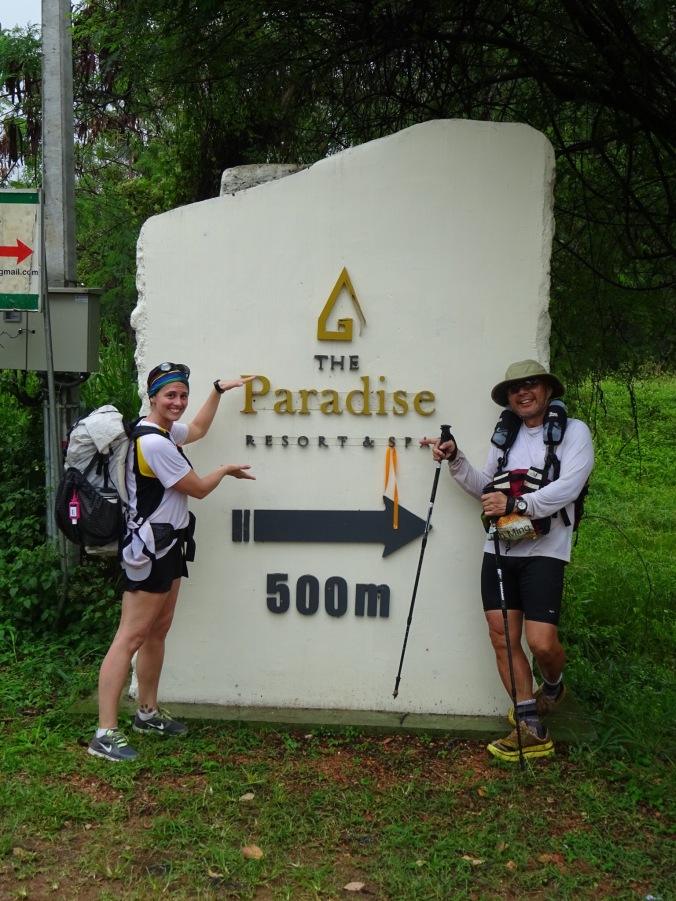 Camp was pretty cool.  It was an open field with tents strewn around and make-shift rain covers. 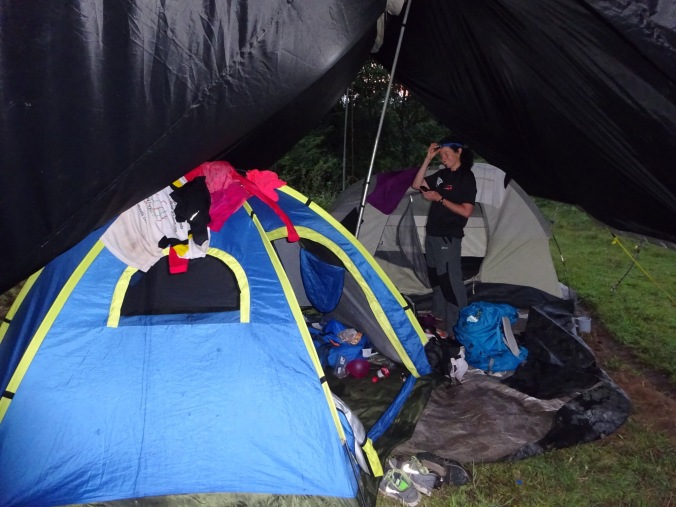 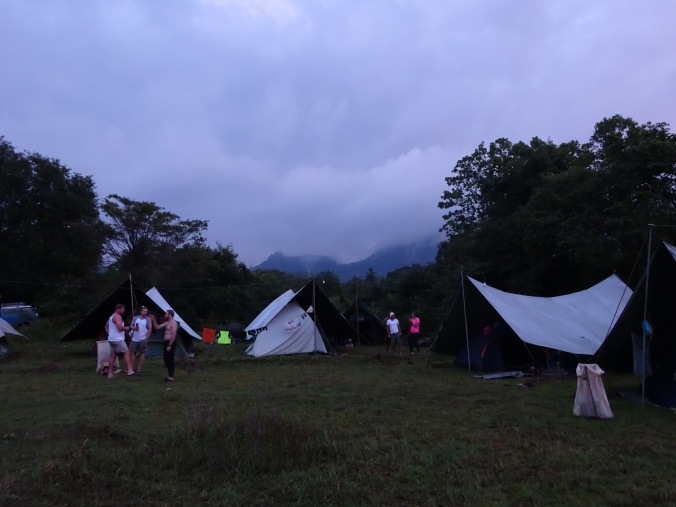 After a quick rinse in a river whirlpool, it was time to retire to our tent palace.  No one wanted much medical help tonight since they figure that they will all pretty much finish no matter what at this point.  Fires were lit around our camp area in order to keep the elephants away.  Last night in the bush!  Tomorrow is the big finish!!!

A very early morning since our split times were 6:15 and 6:45 this AM.  Last stage!!!!!!  We hopped in trucks as the runners were lining up for the start so that we could beat them to the finish line.  After a quick ride to Sigiriya Rock, we began the hike to the top.  It was great to be there early because there were very few tourists nosing around. 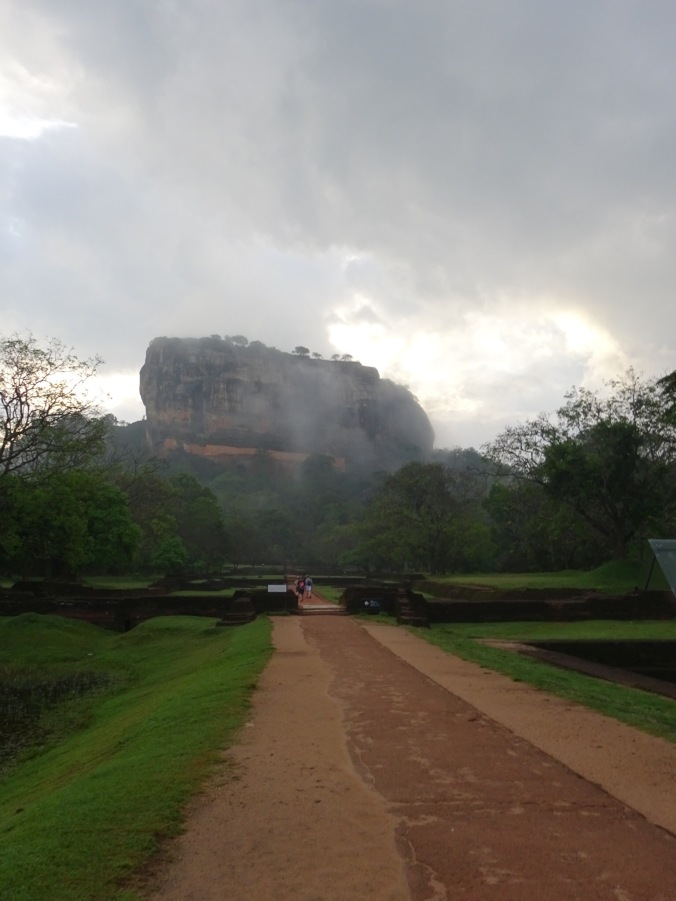 It was quite the climb up steep and slick granite steps.  I think someone said that it was 1,800 steps to the very top. 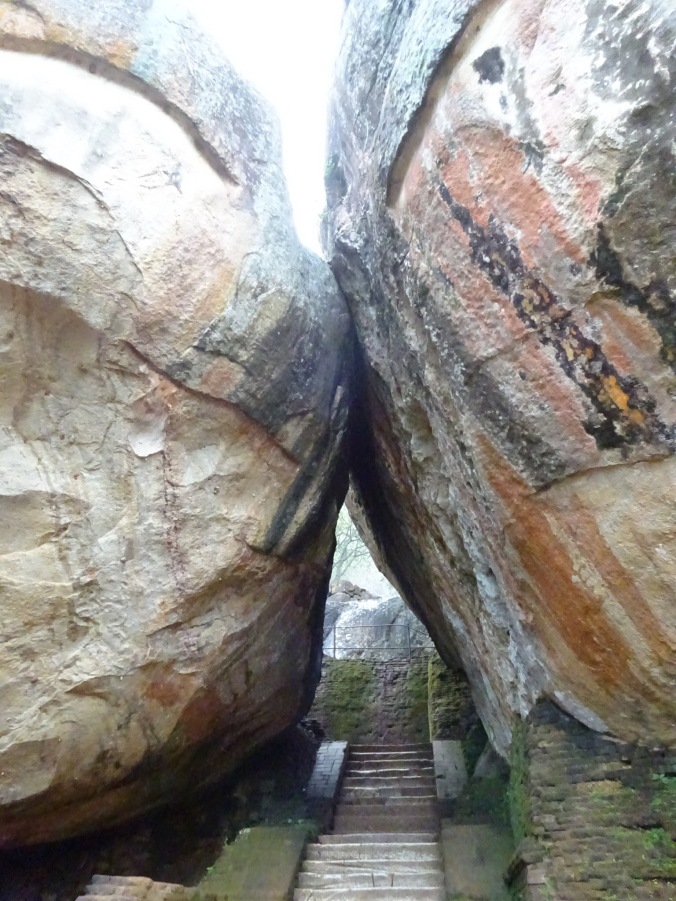 It is incredibly rewarding to watch the runners cross the finish line.  There was such a palpable feel of camraderie and accomplishement.  It ended up pouring down rain while we were on the top.  It didn’t spoil the mood at all though. 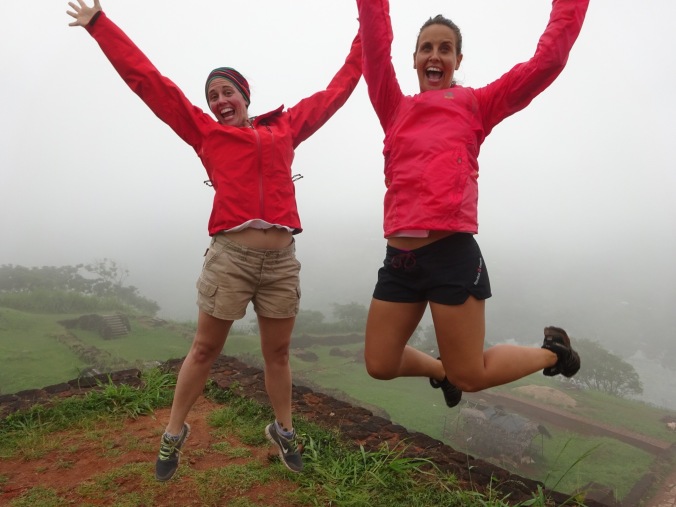 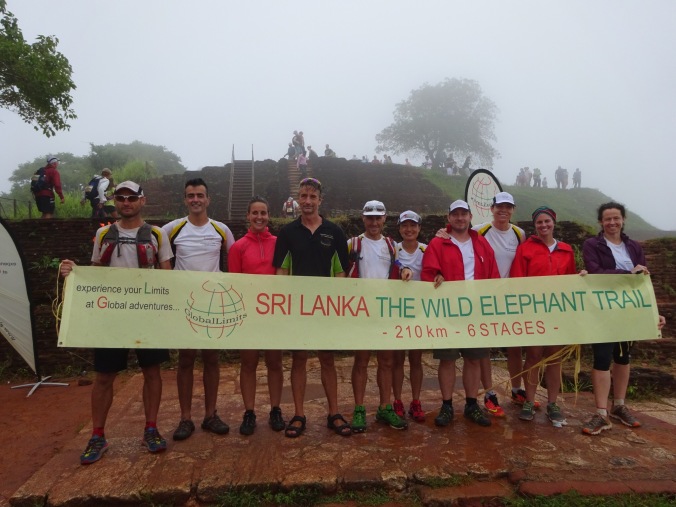 After about a billion pictures taken, and many thanks offered by the runners, it was time to head to the hotel.  It took a while to get down because the steps were utterly clogged with tourists: 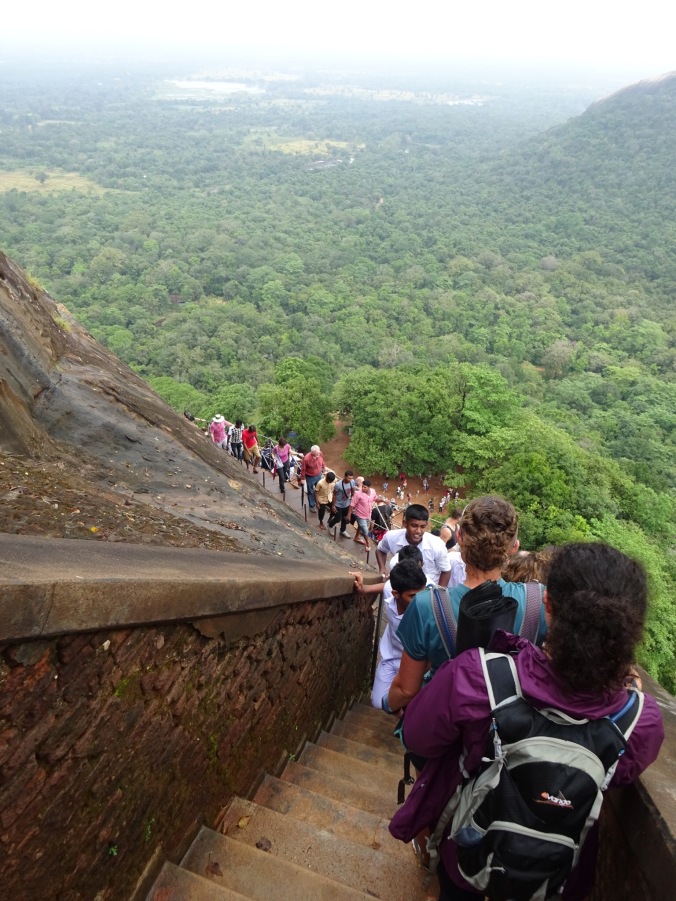 Another race finished!  No major injuries, and everyone finished!!!  Congrats everyone!