Nick and I are back from Las Vegas (well he is already out on his next adventure – ferrying an airplane from Wisconsin to Arizona), and are proud marathon finishers!  We just squeaked by, and beat our goal time by a 44 blazing seconds!  As I mentioned earlier, this was Nick’s first marathon.  It was pretty special that we were able to train for this race together and then cross the finish line side by side.

The race started out on the Vegas strip with a Kid Rock concert blaring.  The first few miles just flew by.  This particular race has the half and full marathon runners all start at the same time so at times it was a little frustrating to see all of the half-ers fly by us.  But I also felt some pride in the fact that we had signed up for the whole enchilada distance.  It was so cool to run by all of the different hotels on the strip.  The massive scale of the different resorts became apparent as we ran.  It was over 4 miles from one end of the strip to the other!  We ran through Old Vegas too, and then out and around some random suburbs and industrial areas.

There were a number of bands and DJ’s out on the course to keep the energy going.  I felt like I could run forever – we even skipped one of our planned walk breaks.  The long training runs we had been doing actually seemed a lot longer than the race.  I love being out there with all of the other racers and the spectators.  And it’s really neat to see all of the hours of training and effort pay off on race day.  I’ll get the chance to do it all again shortly since I’m also signed up for the Walt Disney World marathon in January.

For our celebratory dinner, we went to The Golden Steer.  It was amazing!  For anyone who loves an old school steakhouse or even a Midwest-style supper club – I highly recommend this place.  Don’t let the outside fool you… Once inside, it was all dark wood, red leather booths, and tuxedo clad waitstaff.  Anyone who knows me, understands my great love of finding both the big and small occasions in life to celebrate.  This was a big event in my big life with a great big steak dinner celebration! 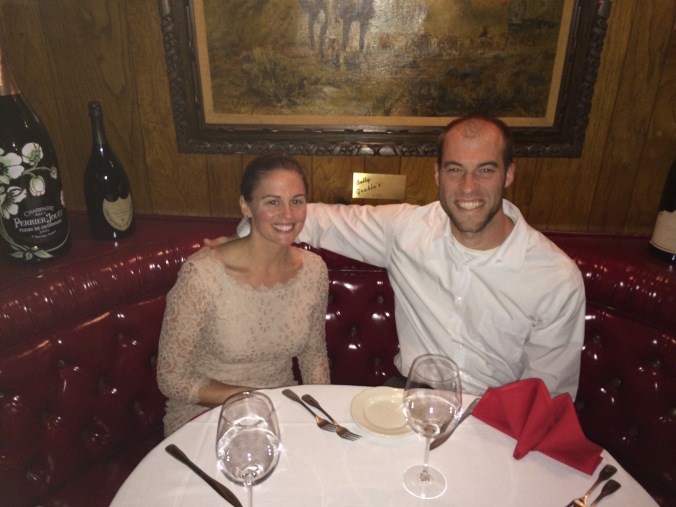