Well here I am at another race. I am lying on an army cot in a big tent with a whole crew of medical personnel. Grand to Grand is a multi-stage ultra that starts at the North Rim of the Grand Canyon and ends at the Grand Staircase. It’s a bigger race than I have previously worked at, with 126 participants from all over the world. It also seems to be the race that treats their volunteers/medical staff the best. We get the entire week catered for us, including sack lunches each day. We also get our large medical tent set up for us each day and there is even a generator which provides us with power and lights until 9pm each evening. Pretty amazing. Even more amazing is our medical team. There are 6 of us, and we are all Emergency Medicine trained. Half of us have completed wilderness medicine fellowships, and every single person here has done at least one major race previously. This is heaven! I am not responsible for every single thing, and I won’t have to see every single foot that needs blisters popped or taped. The town we started in was Kanab, Utah. It’s a sleepy little town that used to have a lot of Western movies filmed there. There are monuments all over town with movie stars of days past etched onto them. There are souvenir shops and dark little saloons. Very cool. The first camp is literally on the North Rim of the Grand Canyon. The views were unbelievable. I think that this course is going to be gorgeous. It should be a good week with good people. 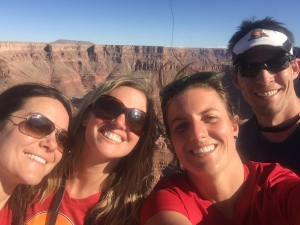 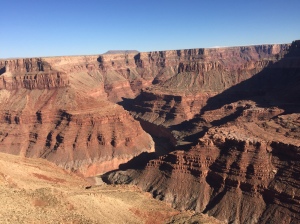 The first stage started off with a dance. It was exciting to see the runners bunch up behind the start line in anticipation of the countdown. Tess, one of the race directors, had the music playing and was doing a boogy in the start corral. A good portion of the running field started off strong at a run. Then we had the folks in back who were planning on spending more time out on the course at a walking pace. I jumped in a truck with the finish line crew and we headed out to camp 2. The finish line was set up quickly and I also was set to work quickly when one of our volunteers struck himself in the face while setting a post. I hate to hear “doctor!” yelled out and I hate even more to see people running. But that’s exactly what happened. I rushed over to see a gentleman pouring blood out of his forehead. I quickly applied pressure and we got him over to the medical tent that had literally just been erected. This is when I realized that our medical supplies were seriously lacking (to put it politely). We had a ton of laceration kits but no sutures. So after scrambling around and fumbling through an entire box of supplies, I barely had what I needed to close up someone’s forehead. Luckily, the direct pressure had stopped the bleeding so I just had to get our volunteer sewn back together. One of the other volunteers was kind enough to give me his personal supply of stitches and I was finally able to repair the huge crescent shaped wound. I’m all about the “Macgyver” medicine, but at the same time, I prefer sewing with sutures not dental floss. But anyway, crisis averted.

The runners started arriving at the finish around 1pm. Most of the more elite runners don’t require much medical care. But then once the bulk of the field started arriving, our little medical tent started getting pretty busy. It started to feel like every single person who crossed the finish line came straight into the medical tent. I probably saw around 50 runners personally before we finally closed up shop. It was a lot of blisters, and muscle cramping, hot spots, and nausea. The usual racer complaints, just a whole lot more of them. It seemed like a lot of people really struggled to get through this first day. We had a total of 6 folks drop out of the race.

Lindsey, one of the current residents at Upstate Medical, came in around 9pm as the last sweep. She looked adorable with her backwards trucker cap and was lit up with pink polka dot flags from the course. Our cowboy cooks had made us a meal of stew and coleslaw. It is a luxury to have all of our meals taken care of. It’s also a luxury to sleep in these big tents with the cots. By the end of this race, I will have spent almost an entire month outdoors. Awesome. 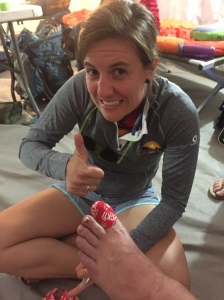 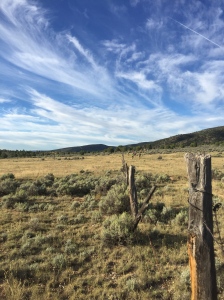 Stage 2 – Another 5:45am wake up call. We stumbled over to the food tent after cramming sleeping bags and other goods back into our duffel bags. Pancakes and bacon! I was at checkpoint 1 today so we left around 7am to beat the runners. Checkpoint set up went smoothly. Since this is a self-supported race, there is basically just a tent, chairs, and water at the checkpoint. The runners came to CP1 in droves.  There was an hour and 15 minute cut-off and one woman came in 5 minutes past the time and had to get pulled out. I felt bad for her but she seemed to take it pretty well.

After all runners were in, Mary (one of the volunteers, from Alberta, very sweet) and I started sweeping to CP2. This was supposedly the hardest section of the course – a steepish uphill stretch for 1.4 miles. It was a piece of cake. Apparently sheep hunting and climbing mountains in British Columbia is the perfect preparation for ultra racing…. One of the runners was really struggling about 1/2 way up the incline -we found him lying under a tree in the shade. He felt dizzy and nauseous but I think he was really having a hard time mentally as well.  I can’t imagine the difficulty of convincing yourself to keep going forward when you know you’ve got 150+ km to go. We trailed him the rest of the 5 miles to the next checkpoint. As we went, we pulled down all the course markings. We were unable to raise anyone on the radios and therefore could not let anyone else on the team know that we were going to be coming in way after the cut-off time. Our runner ended up stumbling in about an hour and a half late. Because of our tardiness, we were met with one of the local search and rescue volunteers. He was not amused whatsoever that he had driven all of the way out to the checkpoint when everyone ended up being okay.  Oh well, all’s well that ends well. 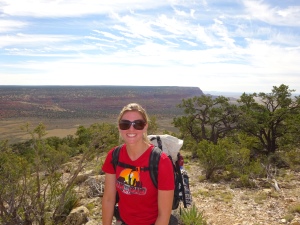 We got a bunch of awesome products from Rock Tape prior to the race.  It’s the only tape that I’ve used in all different environments and it always stays on for days.  I even used it myself on our long hiking treks in B.C.  So we took tons of advertising type shots for them.  Plus we all just looooooove feet. 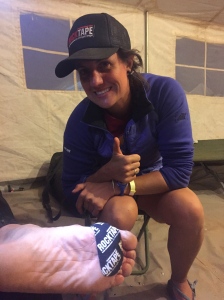 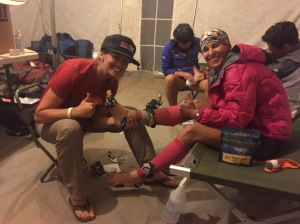 When I got back to camp, the medical tent was bustling with activity. There were runners on all of the cots waiting for help with their….. wait for it…. blisters!  Dinner was great again. And we saw patients right until we closed at 9pm. It is so nice to get to hang out with the other docs while we are all in the medical tent.  It makes me realize how much fun it used to be working with your fellow residents back in training.  Don’t get me wrong, there wasn’t much fun about residency but at least at 3am in the trauma bay, you had someone to goof off with. Here’s a good example:

I had a hard time falling asleep which doesn’t bode well for our 30 hour day tomorrow.  (Stay tuned for the continuation of my narration of the Grand to Grand race.  The long stage is next…)