We were up early for a SCUBA diving trip that we had booked two days prior.  The moment that my head came off of the pillow, I instantly regretted my decision to stay out late and have both mojitos and a beer at the boxing match.  Oh well, you only live once, right?  We hastily packed day bags and tried to wolf down a few items from the buffet.  They were just starting to lay everything out and I felt like we were literally taking things off of the workers’ trays before they could lay them out on the buffet tables.  We ran out front to meet the shuttle van that would whisk if away to a fun day of SCUBA diving.  Well, almost.   First we had to stop at like 14 other hotels to pick up other people that were to be whisked away to a fun day of SCUBA diving.

We finally arrived at the tiny dive school that was right on the water.  After getting our wetsuits and masks, we were ushered out to the waiting boat.  It was both a high speed and high bump ride out to Koh Tao and Chumpman.  For those of you wondering, I was still regretting last night’s decisions….  But it was worth it once we pulled up to a little slice of Thai paradise.

We got to go on two dives.  The first dive was really cool – there was an underwater spire that we explored around.  We saw a ton of giant groupers.  And I mean giant.  Most of these suckers were much bigger than me.  In between dives, we had an excellent lunch of curry and fried chicken on the boat.  This is a far cry of the soggy sub sandwiches that I’ve been served before on full day dive excursions.  It was crazy hot out even while being on the water.  Every 5 minutes had me hopping into the ocean to try and cool off a little.  Our 2nd dive was a little disappointing.  The visibility was very poor – probably the worst that I have ever dove in.  I could barely make out the bright neon fins or masks of the divers around me.  But I guess that diving in the worst conditions is still better than being at work…..

The boat ride back was quite windy and bumpy but it went by quickly.  We got dropped off in town so that we could get lunch at “Ninja Crepes”.  Totally random.  It was also really random music at our hotel’s happy hour.  There was live music – it turned out to be a band of Filipino’s playing mainly American country music from the 1950’s with some Creedence Clearwater Revival thrown in there for good measure.  They were quite good!

Day 7: Saga of the pants

Today we moved to a different hotel.  The theme of this day is going to be linen pants.  Jenn and I had ordered linen pants from a tailor shop, Mr. Jimmy’s – they measure you and then make you custom pants within a day or two.  We went after breakfast to try on a pair before we committed to any more pairs.  They were pretty nice but nothing spectacular – but they were cheap and you’re not going to find nice linen pants at home for a the same price.  We then headed to our new digs, Peace Resort. 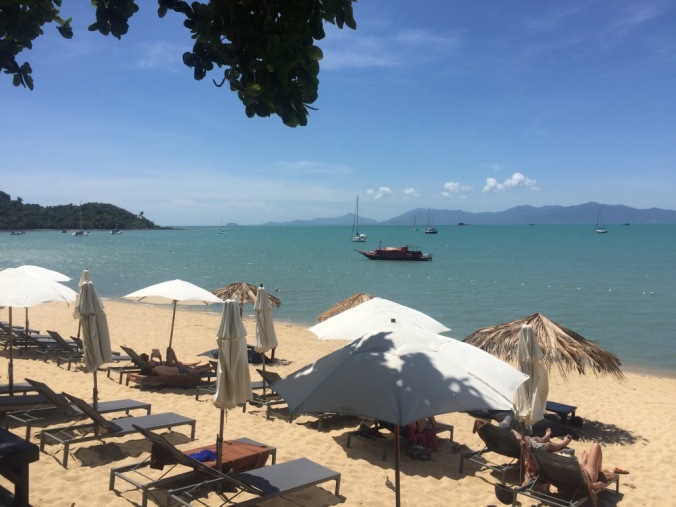 We got in some pool and beach time.  And even a beachside yoga class.  We kept hearing about a night market that was held in nearby Fisherman’s village.  It was really cool.  Lots of cheap tourist trinkets, but also tons of street vendor food and fresh produce.

The three of us got Thai massage, side by side by side.  Which always ups the hilarity when someone’s masseuse is being a little rough on them.  You hear someone shout or gasp and you wonder, “Oh God, I hope mine doesn’t do that to me next.” Thai massage really is a full contact sport.  Here we are, pretty pumped about our massages: 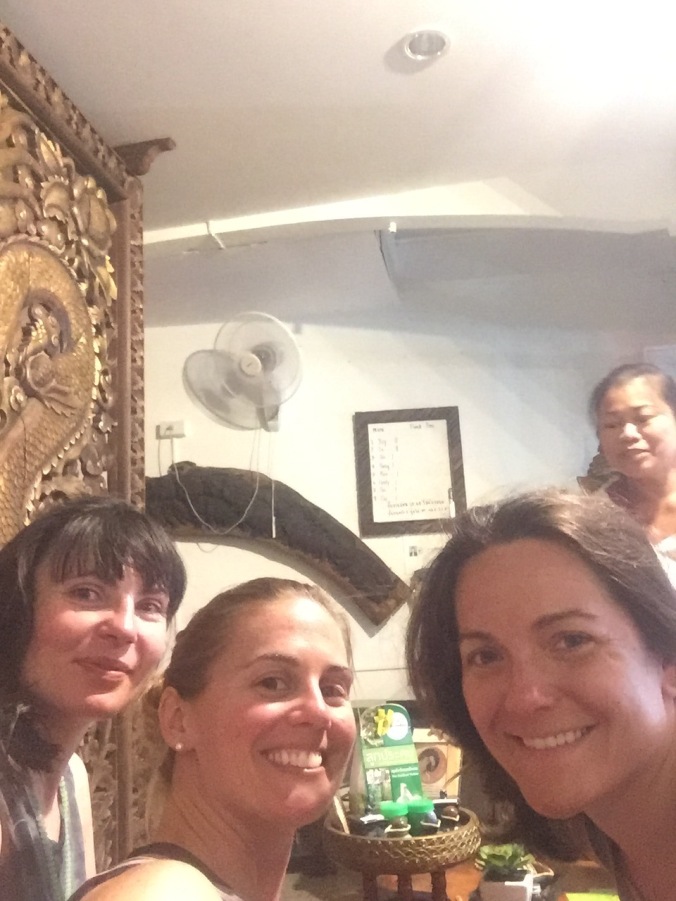 Jenn and I got torn away from one the night market much too soon as we were supposed to go back to the tailor, Mr. Jimmy’s, to pick up our pants.  We took a 30 minute taxi ride over there and no one was at the shop.  The shop was open but no one was around.  We asked local shopkeepers if anyone knew what was going on.  We tried calling.  Nothing.  After waiting for another 30 minutes, we decided to go ahead and try our pile of pants on.  They were terrible!  I don’t understand how custom pants could fit so poorly!  We decided to scrap the whole venture and got the heck out of there.  I was tempted to take the pants and run but Jenn, always the voice of reason, pointed out that Thai prison probably isn’t that awesome.  Fair enough.

By the time we got back to Bo Phut (where our hotel was), the night market was shutting down.  And all the restaurants were closed!  We hit a new low when we had to eat cup o’ noodles and chips for dinner from a nearby 7-11.  Damn you Mr. Jimmy!

We were rudely awakened by the tailor calling our hotel room.  After shouting back and forth for 30 minutes, I think he finally realized that Jenn and I weren’t going to waste any more of our vacation dealing with his crummy pants.  What a scam.

Since yoga was so good the day before, we decided to try the free Aqua Aerobics class that was offered by the hotel.  It was the three of us and then a bunch of ladies twice our age, bobbing around in the pool for an hour.  The other hotel guests seemed to think this was hilarious so we had an audience for our workout.  It was goofy but actually really fun.

The highlight of the day was lunch.  We scampered down the hot beach where there was a tiny kayak sitting.  A Thai couple was serving up fresh salads and spring rolls.  We watched the woman make the dressing and chop up everything for green mango and corn salads.  It was probably some of the best food that we had while in Thailand and it came to a grand total of $2.

The airport at Koh Samui was really nice.  And thankfully there was no Mr. Jimmy waiting for us with the police.  We walked around pretty lily pads and through open air architecture as the sun set over the tarmac.

Tatiana thought it was hilarious that she ordered me a kosher meal for the flight.  Well now I feel bad for people everywhere who keep kosher because this is what I was served: 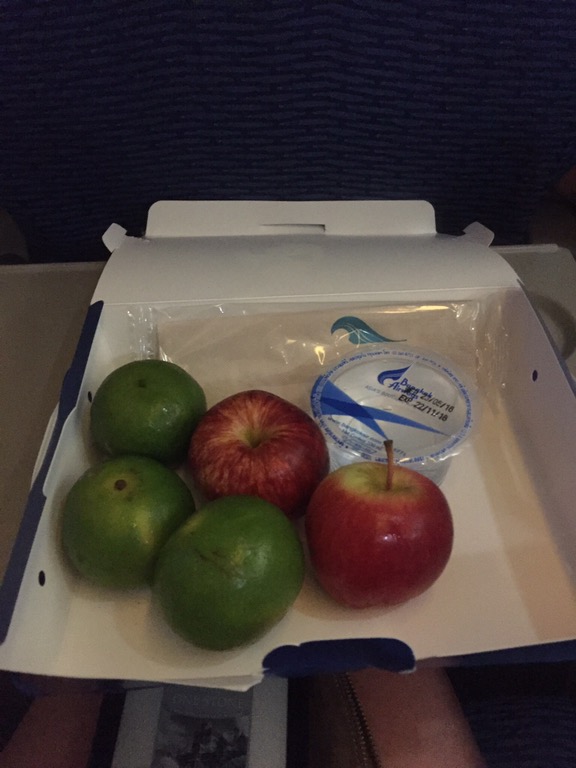 And just like that, we were back in Bangkok.  Our hotel was quaint but a little dingy and dated.  And apparently we were right next to the infamous Patpong.  Wikipedia lists it as an “entertainment” district but it’s essentially where all of the really seedy sex shows, etc. are located.  We unfortunately discovered this because we found ourselves walking through it at 11pm.  Our hotel clerk had given us directions for where to find a restaurant for a late night dinner and we found ourselves smack dab in the middle of the Bangkok red light district.  I’m pretty sure that I didn’t want anything that was on those menus….

All is well that ends well and we finally found a non-adults only place to have dinner.  The odd combo of quesadillas, pad Thai, and cold beer was oddly satisfying.  I can’t believe that I have to start the long trip home tomorrow.

Last day in Thailand.  I’m bummed.  We had another hotel buffet breakfast.  Then we headed to the weekend market.  Jenn and I had so much fun there last weekend, that we wanted Tatiana to experience the splendor of the sprawling market.  We took the subway there which was surprisingly easy and pleasant.  It even had air con!

We found even more fun stuff this time!  And I was able to buy the sandals and clothes that I wanted last trip here when we ran out of money.  I also bought my friends and family some gifts.  I wish that I could say that I bought more gifts than things for myself but it wasn’t even close.  I even broke down and bought the ubiquitous “health balm” that all of the massage parlors used.  It’s kind of like a tiger balm basically.

Ever wonder where to stock up on fake fruit? 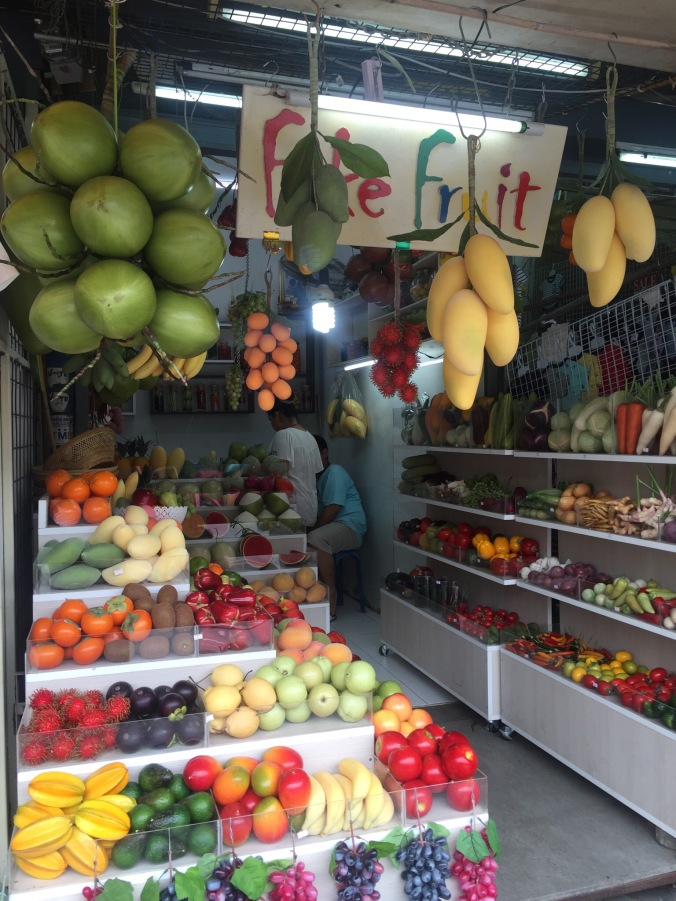 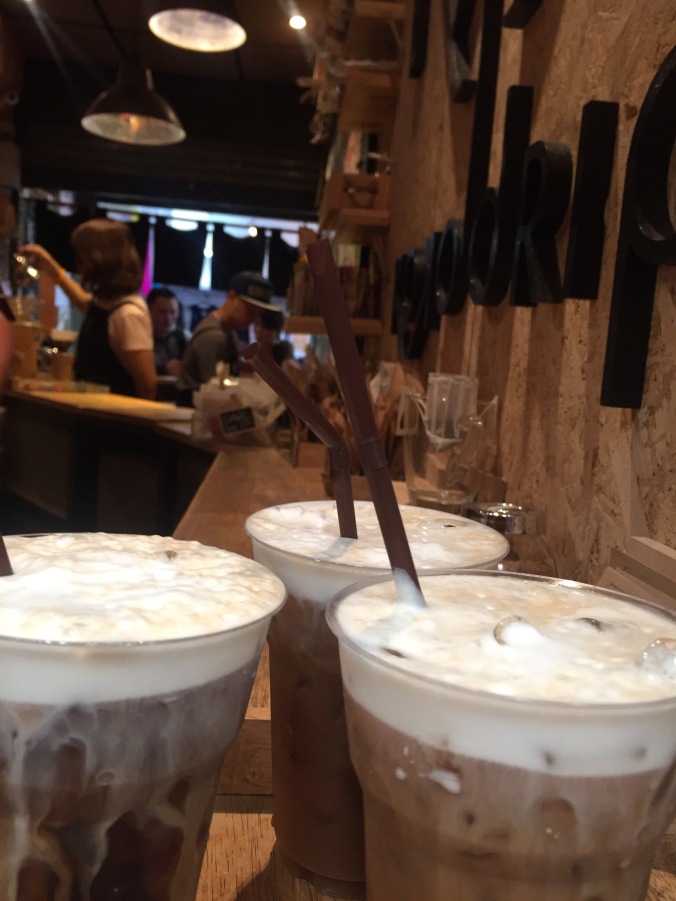 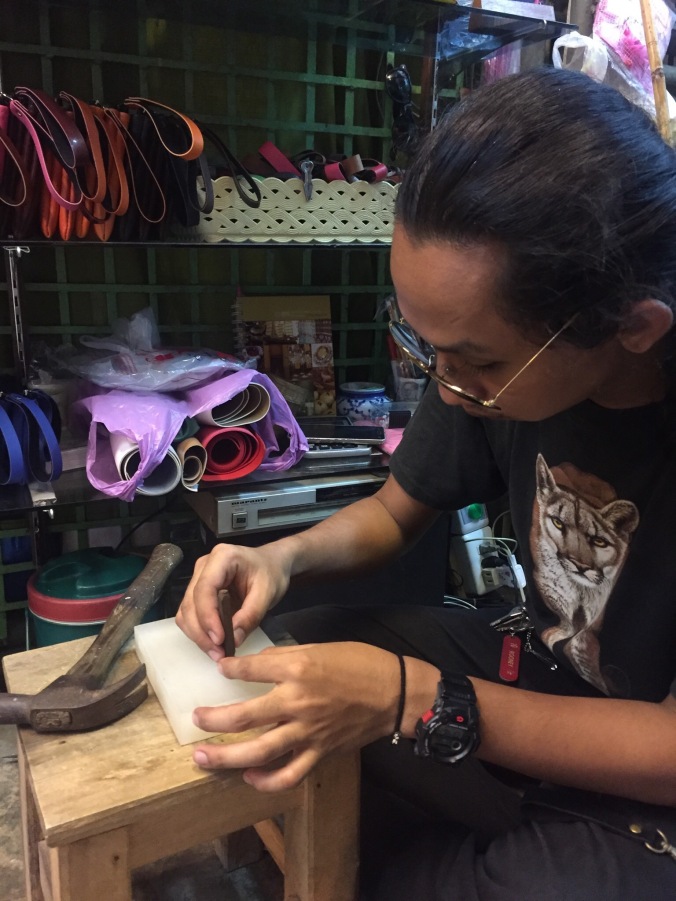 I had to leave Jenn and Tatiana in the hot, close stalls of the market because it was time for me to catch a flight.  I braved the subway by myself which went just fine.  There was definitely some interesting people watching.  I got one last foot massage on the way back, and I think it was like the best one yet.  I passed through a beautiful square on the way back too.

I can’t believe that the trip is over!  I really really enjoyed Thailand but at the same time, am ready to go home.  I would definitely come back.  Thanks to Jenn and Tatiana for such an awesome trip! 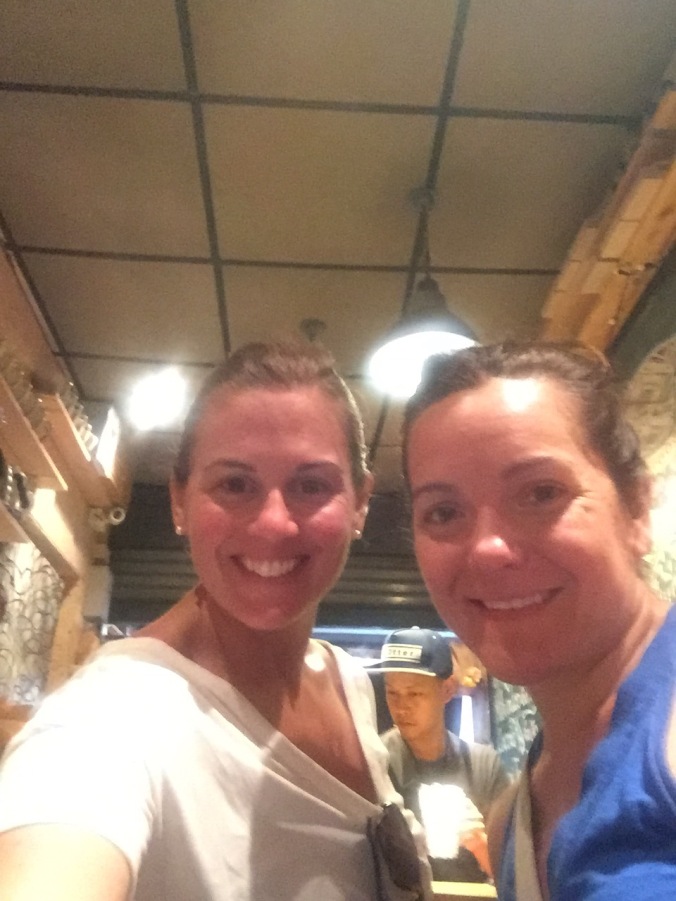 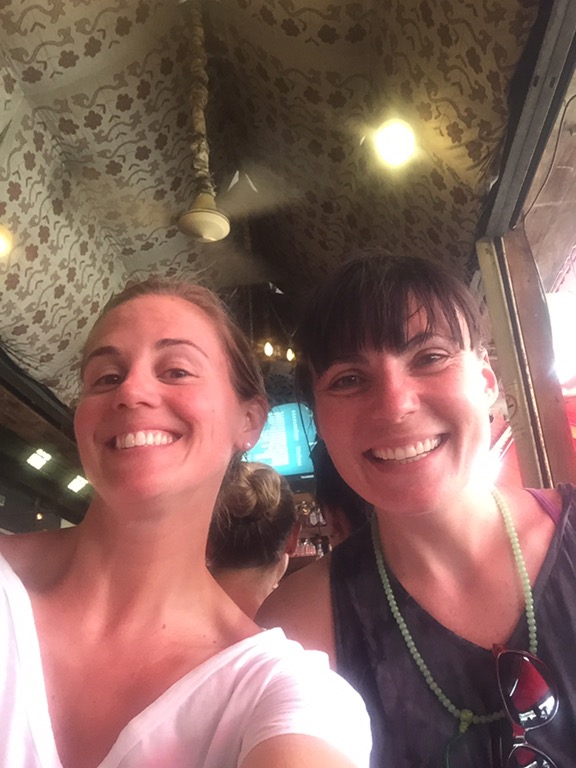