Stage 3: Phajoding Monastery – 3,600 meters!
I forgot how long the walk up to the monastery is. For whatever reason in my mind, I had been thinking that last year wasn’t that bad. Ha.  And I kept telling Jenn that it wasn’t that bad.  Just straight uphill for hours. About 10km uphill with 1000 meters of elevation gain. I started at Stage 1 where people already didn’t look that happy about the hill climbing. And then was dropped off at a temple below checkpoint 2. It was about 2 km straight up in order to reach the checkpoint. It was one of those illusion peaks where every time you think you have gotten to the top, suddenly a lot more climbing materializes in front of you. There was a giant prayer wheel with a lopsided grinning holy man spinning it directly opposite the bench that was the checkpoint. The ringing of the bell was comforting in an odd way.

Apparently two local men were battling over who would get to take home the empty water bottles. Kinzang made a deal that whoever got the bottles would have to take care of our trash as well – good negotiator. When we had about 5 runners left to come through, I decided to take off towards the finish. Hard to say how long the hike would take me with my heavy medical backpack.  It was a nice flat walk to the BBS tower – that’s where I got dropped off last year. Thousands of prayer flags fluttered in the breeze as the climb commenced. 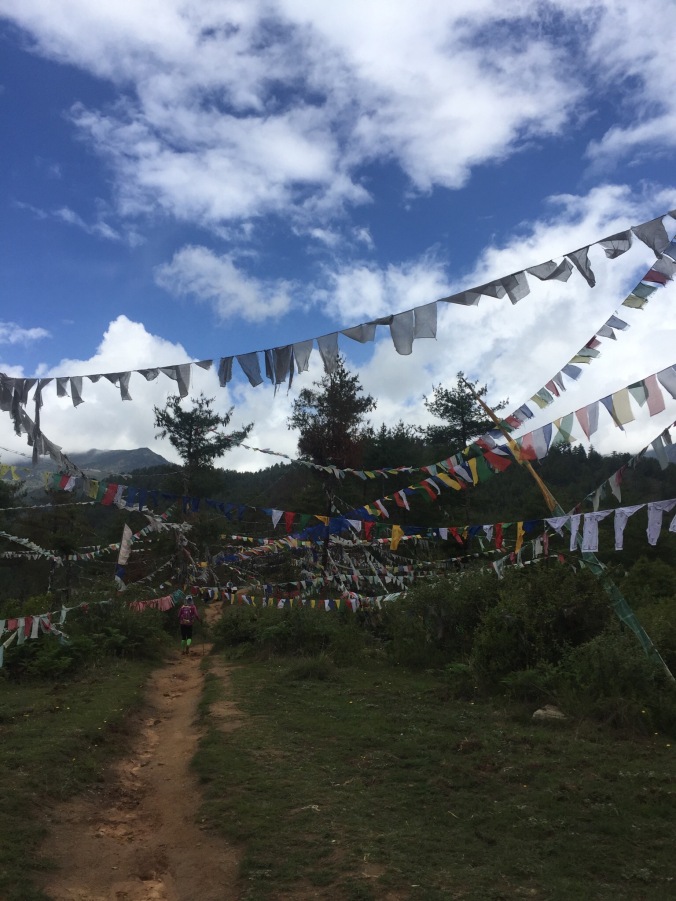 One of the new Bhutanese runners had a new knee effusion so I put an Ace wrap on him, gave him some Tylenol, and sent him on his way with his buddy. I had terrible bilateral effusions the year before after the long day. All of the up and down with a heavy pack was brutal. Interesting tidbit: the same thing used to happen to me after runs over about 16 miles, and then it totally stopped after taking Glucosamine. My Vizsla never limped another day in his life, even after playing ball hard, after I supplemented his food with it as well.  And I’m pretty sure the placebo effect does not work on dogs…  Good stuff. But anyway, the brutal and grinding uphill was upon me. Even walking slowly, I would eventually have to pause to get my heart rate down. I was surprised that I was never really out of breath on the climb. Although my legs began to poop out towards the end. I kind of kept myself within the last 10 runners so I could keep an eye on everyone. I cannot believe that even with my pack, I was faster than the bottom of the field. I’m never fast!

About midway up, there was a respite from the climb. The trail narrowed, flattened, and began winding through thick green Bhutanese jungle. It was so beautiful and peaceful. Butterflies flitted in the light that filtered through and the air was thick was the smell of several varieties of wildflower. But all good things come to an end. The climb began in earnest again. Every time you would swing around one switchback, you were greeted with another wall of red hard-packed dirt. Sometimes it seemed as if it went straight up. Over and again. I was technically supposed to be sweeping so when I estimated that I had about a 30-minute climb left, I parked myself under a tree to wait. The last runner was really struggling. He walked about 10 feet past me and then threw himself to the ground. I heard him mutter, “this can’t be serious, will it ever stop?”. I felt for him as I can hardly imagine making this climb with already about 70 km under my belt.   Finally the rest of the sweep team arrived. There were 2 locals, our photographer (who was the wife of one of the runners), and one of our volunteers.  After a lot of swearing and questioning, we caught sight of the monastery complex. We also caught sight of the last runner. The gentleman who was in 2nd place had walked back down the hill in order to carry the wearied man’s pack. Incredibly generous. Our motley group of six finally staggered up the monastery steps. I was greeted with claps which always feels nice. 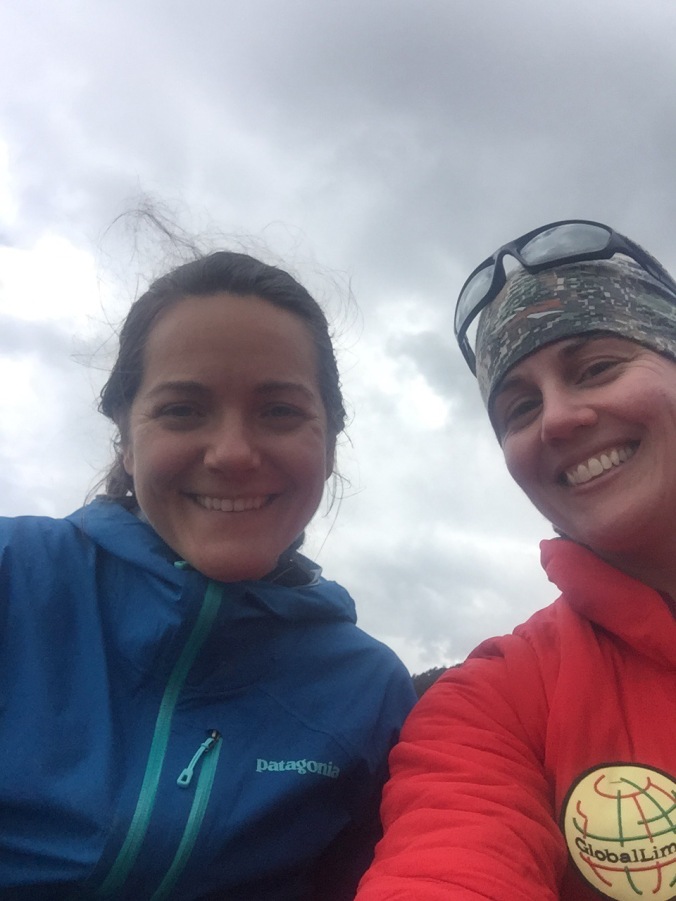 I wish I could say that there was hot lunch waiting but unfortunately it was pretty cold by my arrival. But the coke was delicious! And I was so hungry that the food tasted good. There was a fire going which was a good thing given that it was very cold at 3,600 meters and a constant drizzle that occasionally decided to ramp up into outright rain. The skies felt like they were right at the verge of snow. Ours was a sad camp filled with shivering runners. The afternoon got a little long just trying to stay warm. The highlight of everyone’s evening was the soccer game against the monks. Everyone got really into it this year and we had quite a few talented players. Global Limits finally broke its losing streak and crushed the red robed boys 5-2.

Dinner was a cold and cramped affair in the monk’s dining hall. We were fortunate to at least have a place to get out of the rain. Stephan had arranged for a very special surprise for one runner in particular which benefited all of us – birthday cake! We sang happy birthday and then watched 37 runners demolish a giant birthday cake. Well, three quarters of a birthday cake. Apparently the porter who carried it up took a spill on his way. Oops. 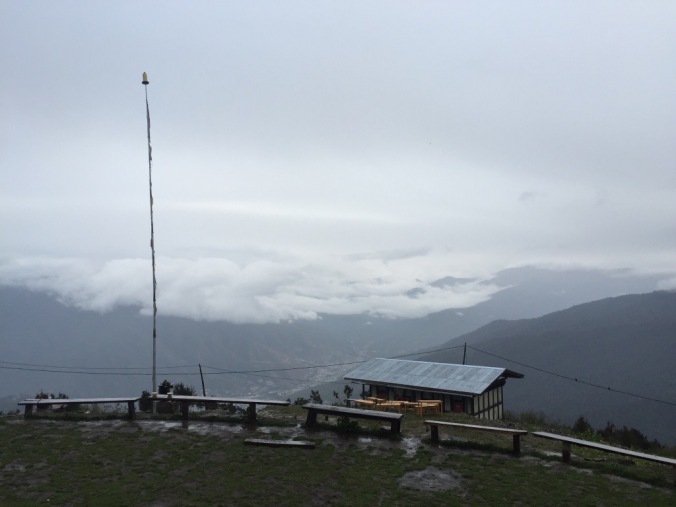 I was surprised to bump into a mule on my way to the toilet before bedtime. He didn’t seem real happy to see me either. Well fine. It was pretty cold in the dining room overnight and I did not sleep very well. I know that I had weird dreams but I can’t remember them. What I am dreaming of now is a hot shower and a soft bed in a 5-star Paro hotel.  As I drifted to sleep, I was really surprised to hear a familiar tune, and also one of my favorites, Guns N Roses’ Sweet Child O Mine.  Apparently the Bhutanese monks are GnR fans too.

It was a difficult but beautiful walk down the mountain. I think it is harder for me to walk fast than run slowly. Here are some beautiful photos from the trip down: 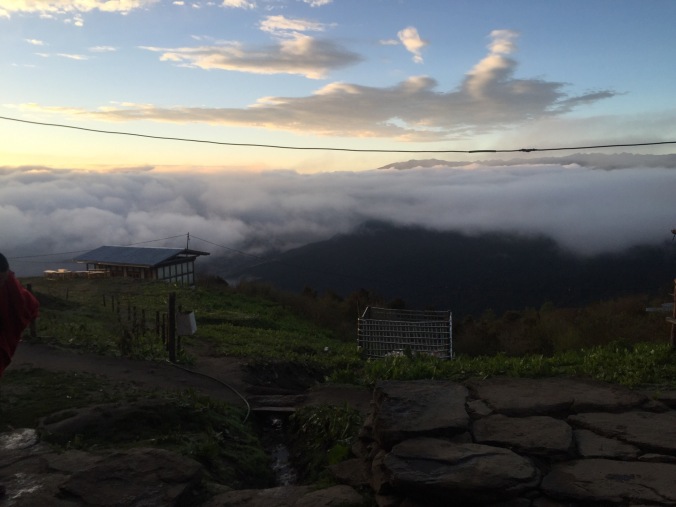 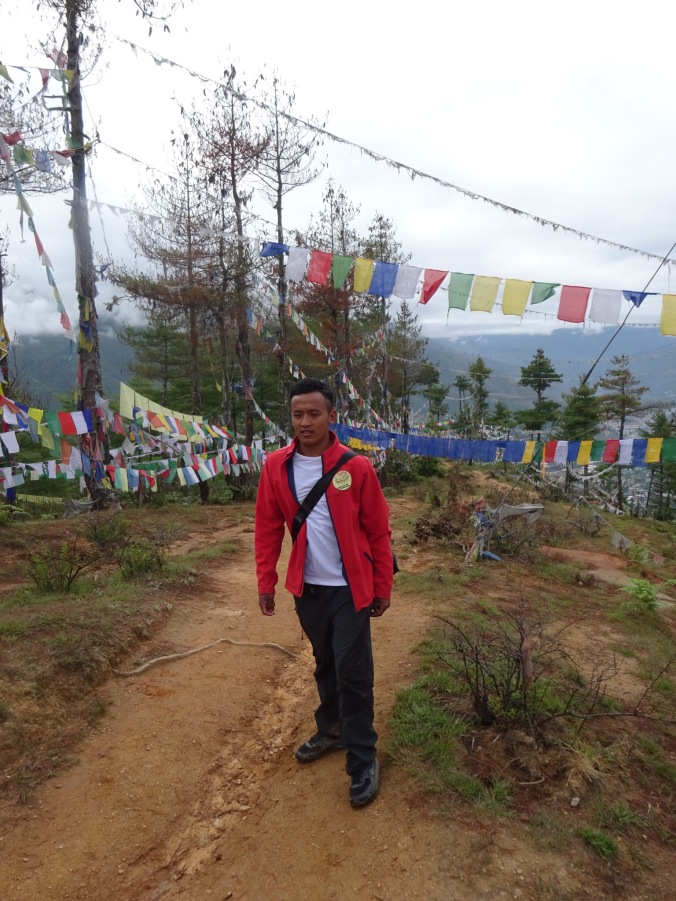