So I am already in Tennessee on my next adventure – giving lectures for the national WMS elective. But I wanted to regal my blog readers with my adventures in the frozen wilds of the Adirondacks. I will be up front about my experience with the ADK Winter School – it was probably the most physically challenging excursion that I have ever participated in. And to be even more honest, I thought about quitting or going home early about a hundred times throughout the week. I’m super proud that I finished, and the sense of accomplishment that I gained and the bonds that I made with my group were well worth the “suffer-fest” week.  And for any Billy Madison fans out there: 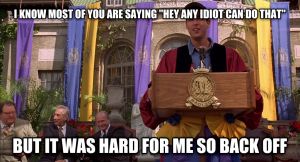 So my trip started with my foot in a compression sack, trying to stomp my giant -40 degree sleeping bag into submission. I finally gave up, and just threw it into the back of my car. Thus starts the Battle of the Bag… Sleeping bag 1, Amy 0. I had a beautiful drive through the Adirondacks and eventually arrived for the pre-school dinner with the instructors at the Lake Placid Pub and Brewery. Everyone is really friendly and welcoming. I would definitely say that there was a unique culture permeating the group. There were summit patches on clothing and lots of slang and jargon thrown around. And I’m pretty sure that these folks are wholly responsible for any decrease in the sale of cotton clothing. Throughout the week, cotton was villain-ized as an evil garb with malignant intentions to rob its wearer of heat and comfort. This is obviously true – that’s why all outdoor gear and clothing is synthetic nowadays. But I digress…. So I’m already starting to think to myself “what am I doing here????” I’m no expert in winter backpacking, let alone mountaineering. And now I’m supposed to help out as the assistant medical advisor? My fears were soon assuaged though. The entire staff was so kind to me. Everyone helped me get my gear tweaked and welcomed any medical input I had. I slept in a bunk room that first evening with a few other female staff members. Sleep was tough because I was already getting a little nervous, AND I swear that the snoring in that room sounded like it was coming from an obese male truck driver.

After all of the arriving students had their stringent gear check, it was time for Self-Arrest training! We traveled over to the Lake Placid Olympic Training Center Ski Jump for the afternoon. It was so much fun. Imagine everything that your Mom told you not to do, and then you have an instructor encouraging you to do just that. We were launching ourselves down sleep slopes head first, on our backs, with very sharp ice axes in our hands. Awesome! We also played around with cramp-on techniques. After a delicious dinner provided by the ADK Loj, I moved my belongings to a new bunk room. I had my large backpacking pack, my personal clothes in a duffel, and a second duffel with extra camping supplies. I feel like I had way too much stuff – this has become a theme in my wilderness medicine life. Like when I came back from Cambodia, I vowed to travel lighter. Mainly so I don’t have to schlep everything around myself. Tomorrow will be our “shakedown” hike. I.e., let’s hike 8 miles with nearly full packs in snowshoes, just to see how our group handles it. Gooooooooood. This didn’t make for sweet dreams. Before bed, I had to once again try to load up my sleeping bag. I got it into a stuff sack, but not the compression sack. Sleeping bag 2, Amy 0. The Battle Royale continues.

Up early to see how much food I could get into my pie hole in a short amount of time to fuel my journey. We were climbing what everyone called “Little, Little Haystack.” After a short drive, we loaded up at the trailhead. It was beautiful in the woods. There was at least a couple of feet of snow and the temps weren’t too frigid. We hiked in “rolling lead.” The front person would walk 30 paces, and then roll out. And this continued in almost a caterpillar type fashion. I really liked this. I tend to always be the slowest hiker in a group (clearly because of my short legs, not my fitness level….haha), and it helped the whole group stay closer together. We stopped at a lean-to to practice quick changes from snowshoes to cramp-ons. If by quick, you mean 7-10 minutes, then yes. We did a “bush-whack” to the summit. This means that there was a perfectly good trail up the mountain, but we were too cool to use it. Using maps and compasses, we were able to make it all the way up. Everyone was in high spirits, there was beef jerky and other snacks all around, and then we began the arduous task of getting back to the car. And this is where things began to feel unfair. We ended up hiking uphill for roughly 1.5 miles to the junction where we had absconded the traditional marked trail. It definitely sucked, but after a quick candy break (the candy had been baked in the oven at 98.6 degrees for 15 minutes, ie it was inside my jacket), we eventually conquered the long gradual incline. We floated back down to the cars, and rushed back for hot showers and dinner. After a few lectures, we got to choose our summit hike for the next day. Given the fact that my lack of training in snow with a 40 lb pack on my back was already starting to catch up with me, I opted for one of the less hardcore treks. 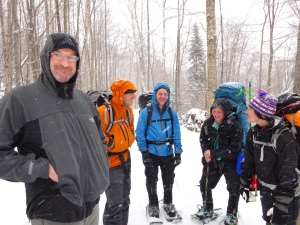 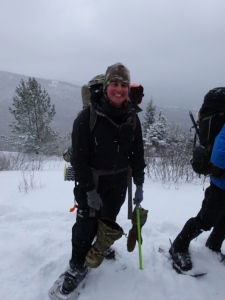 Hurricane Mountain. What a pleasant day. It was a 2.6 mile hike up to the peak. I was carrying my Hyperlite cuben fiber pack as my daypack and compared to the day before, it felt like I had nothing on my back. As we got close to the top, we changed into summit gear. This included a balaclava (I still think baklava in my head every time), goggles, down puffy jacket, crampons and ice ax. This may have been a bit overkill but it definitely made me feel pretty legit. The 360 views from the summit were unbelievable, and the winds were actually not that bad. As we were standing up top, a man rolled up with his golden retriever. That made me smile for two reasons: 1. We were all totally geared up and he was in low day hiker shoes, a fleece, and a fanny pack. 2. It also reminded me of the many adventures that I had with my late, beloved dog, Jack. After a few more minutes admiring the view, it was time to go back to the cars. The hike down seemed never-ending. It was hard to believe that we had hiked uphill that far. But just as all bleeding eventually stops, so does any long hike. Now the only barrier between me and our backpacking adventure is the final battle of the sleeping bag war. I should lie and tell you that I finally squeezed that puppy into submission, but in reality one of the other members of our group finally got it into the stuff sack for me. But I am still partially counting that as a victory – part of success is knowing when to outsource. So the final count stands: Sleeping bag 2.5, Amy 0.5. 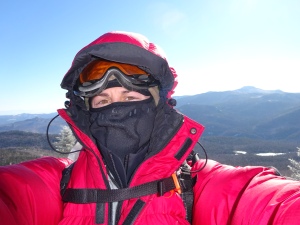 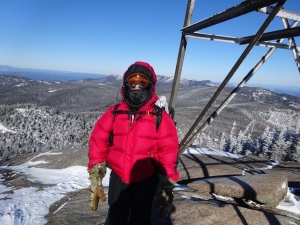 Old carefree Amy with her most favorite hiking companion:

The obligatory gear photo because I want companies to give me free stuff (!):

Stay tuned for the backpacking portion…